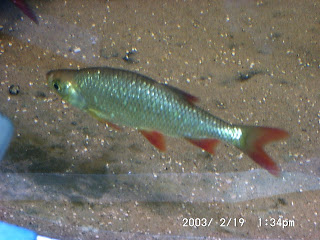 There is a new report (http://www.guardian.co.uk/environment/2008/feb/23/pollution.water) from the WWF about a major pollution event ('The French Chernobyl') involving one of France's great rivers. Apparently, the French Government has now banned the consumption of freshwater fish (including bream, pikeperch, carp and catfish) from the entire length of the river (from the Swiss border to the Camargue delta on the Mediterranean) taking in Lyon and Avignon. Freshwater fish are cheaper than marine species and were once of popular local food item but a commercial fisherman (Cedric Giroud) sent some apparently healthy fish for testing in 2004 when people around the Grand Large area of the Rhone outside Lyon expressed concerns about dead birds in the area (this turned out to be avian botulinism and was unrelated to the fish). The tests revealed that the fish contained 10 to 12 times the legal safety limits of polychlorinated biphenyls (PCBs) once used in electrical generators, transformers, insulating fluid and many other industrial applications. PCBs (http://en.wikipedia.org/wiki/Polychlorinated_biphenyl) are relatively stable chemicals that bio-accumulate and produce liver damage, infertility and birth detects as well as being carcinogenic (cancer generating) in a range of mammals and birds. These materials have reportedly been implicated in a number of serious pollution events in the USA are elsewhere since the 1970's. Since the ban on the sale of fish from the Grand Large at the end of 2005, the ban has been extended to the entire Rhone and sales of eels from the Seine and the Somme have also been precluded on similar grounds. Given the nature of PCBs it is likely that they have 'lurked' in some of France's river sediments for more than 20 years. This seems to be yet another example of the long, long legacies of certain industrial processes. It is surprising that demonstration of the existence of these dangerous chemicals in the Rhone fish seems almost accidental. It seems of great importance to urgently assess the impacts of these materials on the human and animal lives around these rivers. This may well vary from location to location and from organism to organism.
- February 24, 2008