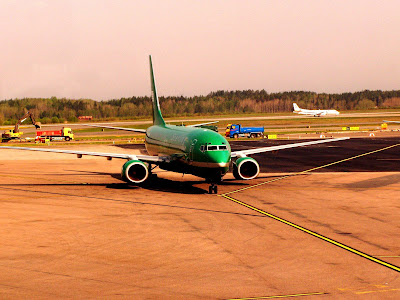 Reports today (http://news.bbc.co.uk/1/hi/england/essex/7770513.stm) that an early morning (around 3am) invasion of a restricted area at Stanstead by more than 50 protesters from the 'Plane Stupid' campaign, effectively caused the cessation of flights for some 2 hours. The protesters claim to be mainly concerned about the carbon dioxide release generated by flights but, I suspect, that support for this action was locally swelled by residents opposed to the plan to build a second runway at this airport. The protesters (many, said to be unaware of their final destination because of fears by Plane Stupid that it would be infiltrated) apparently cut their way through the fencing and, once inside the site, chained themselves to fencing that they brought with them. Many people in the UK seem to favour cheap air flights. They may have been soothed by claims that aircraft can use 'green fuels' - not a very convincing argument as such fuels would produce just as much carbon dioxide and would replace other crops including food. They are likely to have been irritated by this event. The message was certainly strongly disseminated by the event and I can see this kind of direct action becoming more common, especially if sections of society become convinced by some of the issues in 'The Final Countdown' (see post of 9th December).
- December 08, 2008