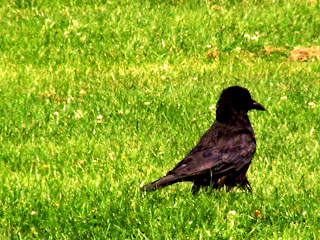 Russell Gray of the University of Auckland (New Zealand) has reported in the journal Current Biology that New Caledonian crows (Corvus moneduloides) show tool use comparable with that of chimpanzees ( http://www.guardian.co.uk/science/2007/aug/17/1 ). The birds were given a task in which a food reward could only be reached using a long stick. The stick, however, was inaccessible to the bird in a box. The bird could access a shorter stick (inadequate to reach the food). Rather than attempt to obtain the food with the short stick, 6 out of 7 crows used the short stick to obtain the longer stick (they were not distracted by a control situation involving a second box with a useless stone, rather than a long stick in it). Dr Gray has also shown that these crows are capable of modifying existing tools to improve their utility for particular tasks (a very early human type of activity). The Behavioural Ecology Research Group on Crow Research ( http://users.ox.ac.uk/~kgroup/tools/introduction.shtml ) have much more detail on studies with these interesting birds. Members of the same Corvid family around Swansea seem to have developed the habitat of dropping mussels and slipper limpets from a height on to the cycle path to Mumbles to aid their feeding. Perhaps we have not given this intelligent family of birds sufficient credit for their logical abilities?
- August 17, 2007