A Nibble in the Swansea Region? 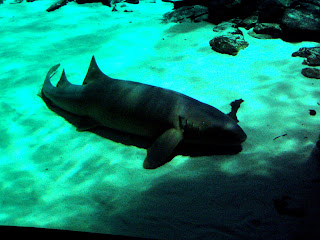 Had a media contact from the Western Mail ( http://icwales.icnetwork.co.uk/0100news/0200wales/tm_method=full%26objectid=19556046%26siteid=50082-name_page.html ) about the 'Sun' front page article on the alleged Great white shark sighting causing panic around the Cornish coast. I was asked if such dangers were likely to lurk around the Swansea area. I understand that some video clips of the claimed sighting have been produced. Most marine experts questioned, however, seem to think that the animal (or animals?) pictured are much more likely to be the large but generally harmless (its a plankton eater) Basking shark that is a regular visitor to those waters at this time of year. Sometimes even the fins of Dolphins or Porpoises (and you certainly get those off Swansea) are misidentified by swimmers as belonging to sharks! Having lived and snorkeled in Hawaii, I know only too well have it is possible to see dangers that turn out to be less than dramatic. You can go shark fishing from Cornish ports, but the animals captured are species that rarely reach more than 4-5 feet and are hardly 'man-eaters' (like the juvenile Porbeagle that was washed up). You could argue that sharks get a rougher deal from humans than vice versa. I think a Great white shark would be really unusual in this location (and am not convinced by the present 'evidence'). Boringly, I think Swansea swimmers are more likely to face dangers from surfers, powerboats, Weaver fish and occasional species of jellyfish.
STOP PRESS
After a mountain of print, hoaxer Kevin Keeble, a bouncer from Newquay, admitted taking the only authentic looking footage whilst on holiday, shark fishing off Cape Town.
- August 02, 2007