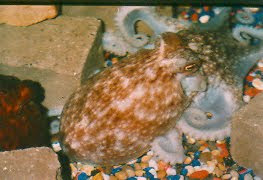 Julian Finn and Mark Norman of Museum Victoria in Melbourne have reported (http://www.sciencedaily.com/releases/2009/12/091214121953.htm) what they think is the first example of tool use in an invertebrate. They observed several specimens of an octopus Amphioctopus marginatus, in the seas around North Sulawesi and Bali, collecting half coconut shells that had been disposed of by vendors and then carrying them to 'home' locations. When they arrived at their chosen spot, they assembled two halves to make "a spherical hideout". There is no doubt that the octopus is amongst the most intelligent of the animals that lack a back-bone (they are probably brighter than many fish, amphibia and reptiles). The behaviour seems to be an adaptation of the cephalopod using discarded mollusc shells.
- December 16, 2009