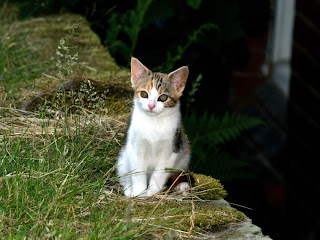 The BBC programme on 'the private life of the domestic cat' (Felis catus) was certainly an interesting first stab  (http://www.bbc.co.uk/mediacentre/latestnews/2013/secret-life-of-the-cat.html) although I think this limited tracking study of cats in a single English village was hardly an 'experiment'. In my eyes, a better description would be a 'limited, largely descriptive, study'. Although it is true that new technology can help us interpret the behaviour of organisms more effectively (there are devices that would have given more detailed descriptions of what the cats actually do as they roam the environs). My biggest reservation, however, is the highly speculative claim that cats my be 'evolving', moving away from their natural wild tendencies of hunting and territorial activity and emphasising their 'kittenish' characteristics that are more suitable to becoming a valued 'pet'. 'Evolution' implies natural selection meaning that cats with the favoured characteristics would tend to leave more copies of their genes in the next generation than 'wilder' counterparts. Humans, however, might well select lines of cats that make good pets (which would be artificial selection). They also often neuter their feline friends (hardly conducive to subsequent evolving). It could also be the case that different groups of humans would favour different characteristics in their cats (e.g. many farm cats were prized for their abilities to kill rats and mice that infested grain stores- people also tended to pass on the kittens of such cats to friends- again, a form of artificial selection). Cats certainly exploit their human hosts in a multitude of ways.
- June 14, 2013