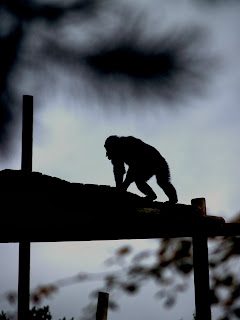 It has been reported (http://www.theguardian.com/world/shortcuts/2013/dec/03/chimpanzees-human-rights-us-lawyer) that a 'human rights lawyer', Steven M. Wise is petitioning for chimpanzees to be granted protection from 'unlawful detention' and be freed. I have much sympathy with the plight of (genetically) our closest relatives on the planet and there is little doubt that some animals are kept in inappropriate conditions but there are a few problems with this move. Giving 'human rights' on the basis of genetic commonality is a bit arbitrary (we share 30% of genes with yeast) and, as many people have pointed out, rights generally imply responsibilities (difficult to enforce in non-humans). Where would the captive 'chimps' be released to? Chimpanzees are powerful animals and beasts that have been in captivity for periods of time would find it extraordinarily difficult to survive in 'wild' locations, even if appropriate locations can be found (even then substantial and expensive pre-release training is needed). A  blanket ban on captivity might also make a range of conservation attempts directed to this species very difficult. It seems to me that what we need is enlightened and humane treatment of animals rather than lawyer's devices.
- December 04, 2013