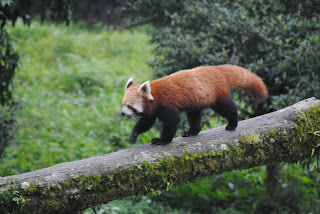 The Giant panda (rather than the much smaller Red panda as illustrated) is being given a major boost in its native China (https://www.theguardian.com/world/2017/mar/31/china-to-create-giant-giant-panda-reserve-to-boost-wild-population). The intention is to link several reserves, creating a panda area of more than 27000 square kilometres. The Giant panda has already shown signs of an inprovement in its conservation status. Creation of the park will mean displacing around 170k people whose use of bamboo and grazing of cattle is seen as inimical to the project. Such as reserve would naturally also benefit many other animals and plants in that area. It is generally unappreciated by the general populice how large reserves have to be to accommodate viable breeding populations of large animals with substantial home ranges. Perhaps the Chinese Government is also perhaps starting to take an interest in the conservation of large mammals in other parts of the world, with new restrictions on ivory carving in that country. It will be interesting to see whether this has any real beneficial effects for the African elephant. Chinese 'medicine' continues, however, to threaten the Rhinoceros, Tiger and other animals
- April 01, 2017