Toads Put Crocs in a Hole? 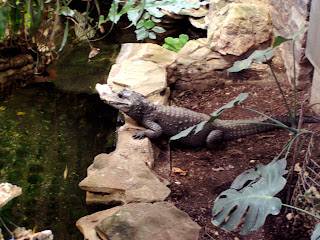 It has been reported (http://www.guardian.co.uk/environment/2008/jun/06/wildlife.endangeredhabitats) by Dr Mike Letnic of Sydney University that the alien Cane toads (Bufo marinus) may be responsible for dramatic declines in the numbers of indigenous freshwater crocodiles in the Northern Territories of Australia. The toads (now a serious pest) were introduced in 1935 from Hawaii (the species is originally from Central and South America) as a potential biocontrol agent for French's Cane beetle (Lepidiota frenchi) that was decimating sugarcane crops (http://www.fdrproject.org/pages/toads.htm). That didn't work, as the toads couldn't access the beetle grubs in the roots of the plants and began eating lots of insects, worms, fish, amphibia, small birds and mice (including pet food left out for cats and dogs). The toads have spread massively since their introduction and major problems have been caused by the defensive toxins that these amphibia secrete. Ingestion of the toads kills pets and many indigenous snakes that try to eat them. Dr Letnic believes that an approximately 33% reduction in freshwater crocodiles in the Victoria River District between 2007 and 2008 is due to the Cane toads that have moved in that time through the river system. Examination of crocodile carcasses confirmed that they had eaten (and been poisoned by?) Cane toads.
- June 06, 2008