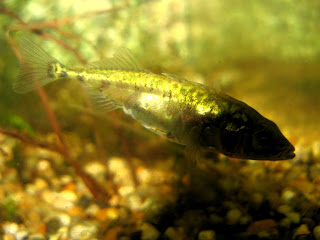 Yet another weird link has been suggested between the human use of pharmacological agents and wild animals in a report from Sweden (http://www.guardian.co.uk/science/2013/feb/14/anxiety-drug-rivers-changes-fish-behaviour?INTCMP=SRCH). Researchers claimed to have found that elevated river levels (presumably by being secreted in human urine) of oxazepam (an anxiolytic drug generally prescribed to counter human anxiety) can be linked to increased 'boldness' in some fish species (notably Perch). The most obvious conclusion is that the drug changes the behaviour of the fish, making them (like humans) less anxious.  The possibilities appear to remain, however, that bolder fish are simply able to tolerate higher levels of water pollution or that the fish require more food to tolerate the more demanding conditions and so have to be bolder. It would be interesting to determine whether other fish, like territorial male Sticklebacks, showed changed behaviour in response to adding oxazepam to their water.
- February 15, 2013