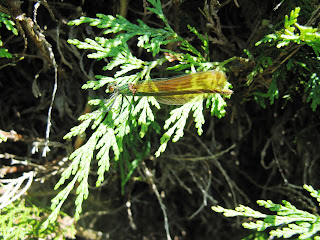 The Royal Society of Biology is apparently going to ask Britons to vote for their 'favourite bug' as a means of drawing attention to the effects of pesticides, habitat loss and climate change on such organisms (http://www.theguardian.com/environment/2015/aug/02/insect-poll-highlights-uk-threatened-species). This is all very timely but I can't help but feel that the vote will not be as meaningful as the recent vote for the favourite bird (the European robin, a species that all the people voting in that poll will have seen). The trouble with invertebrates is that there are many, many more candidates and most people will not have even noticed more than a few of them. Ladybirds might get a lot of votes from the children's book series or the nursery rhyme but, I suspect, spiders (in spite of also having a nursery rhyme) have less positive PR. Wasps are also generally misunderstood. Many of the candidates listed in the article seem to be the bigger and brighter species. How many votes is the Beautiful demoiselle (Calopterix virgo) likely to glean?
- August 02, 2015