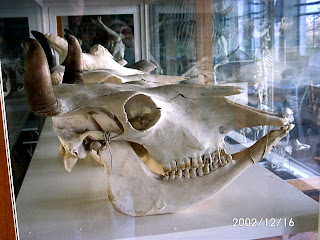 I first raised the issue of the venerated ceremonial bull at the Hindu Skanda Vale Temple that had tested positive for Bovine TB on the 10th of May. The Veterinary authorities had suggested that the animal should be killed, a decision hotly disputed by the monks who threatened to form a human defensive chain, produced an online petition and said they would go to court. The story went ballistic being featured on BBC television and creating large numbers of column inches in local, the UK and even the world press. I suggested, at the time, that the issue would be very difficult to resolve as the two sides were operating from entirely different moral perspectives (namely the sanctity of a particular life versus the convention that sometimes sacrifices had to be made for the common good). Everything then went quiet, giving at least the impression that the issue had been 'kicked into the long grass' until the political elections and the changes in the National Assembly had been resolved. The issue is now back on the agenda as the politicians have reiterated that Shambo should be 'put down' and the monks have confirmed their keenness to challenge this decision in court. The monks claim that Shambo should be allowed to live because he will 'never enter the food chain' (that was unlikely anyhow given their vegetarian beliefs). In actuality this makes little difference as the veterinary concerns are that Bovine TB can be passed by breathing to a wide range of domesticated and wild mammals and even (more rarely) to humans. They will also be concerned that an animal showing evidence of the disease will have impaired welfare. In general, agricultural vets in the UK are not very keen on vaccination as this raises antibodies, and their presence in unvaccinated animals provides an accurate and rapid test for disease exposure. Having said this, expensive and rare mammals and birds in zoos have sometimes been vaccinated against a range of diseases. The surrounding farming community, if they rear cattle, will be well used to the idea that, if their animals develop certain notifiable diseases, vets are likely to order destruction of the herd. This is to prevent possible transmission to animals on surrounding farms. The orders are not optional such that pet or pedigree animals can be exempt. It seems likely that the politicians would like to be seen to be following 'good scientific advice' and to appease the farming community without appearing insensitive to religious sensitivities, This would appear to be a most difficult balancing act!
- July 04, 2007