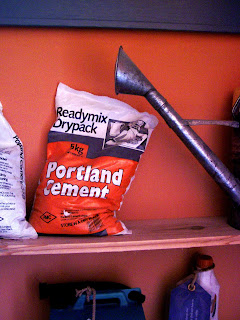 A timely article (http://www.guardian.co.uk/environment/2007/oct/12/climatechange) has appeared more-or-less at the same time as Al Gore's Nobel Peace Prize for his 'An Inconvenient Truth' campaign. This basically points out that the 'low profile' cement production business (where limestone is heated, often using coal, in kilns to around 1500 degrees Celsius) is actually responsible for generating around 5% of the world's carbon dioxide (around 5bn tonnes annually). Cement is used in the production of concrete (the 2nd most used material on the planet) which is needed in all sorts of building programmes (including housing). Almost 50% of cement is currently produced in China. In spite of its role as a polluter, a recent meeting of cement producers in Brussels reported only very limited attempts to reduce emissions (mainly in Europe). In deed, Dimitri Papalexopoulos of Titan Cement Athens went so far as to say "You can't change the chemistry, so we can't achieve spectacular cuts in emissions". Two points may have to be considered. Firstly, the general public has to be more educated in terms of the relative contributions of particular human activities to CO2 emissions. Secondly, it must be possible to build in ways that do not always involve 'concreting over' our environment
- October 13, 2007