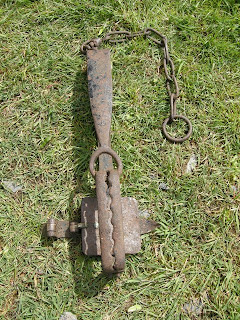 The obsession surrounding the 're-introduction' of the eradicated UK beaver gathers momentum in Scotland (http://www.scotsbeavers.org/) and Wales (http://news.bbc.co.uk/1/hi/wales/7418768.stm) but not yet in Beverley Yorkshire (so-called because of its former burgeoning beaver populations). The animals intended for the scheme are European beaver (Castor fiber) and are likely to be taken from Norwegian populations. There have been supposedly 'successful' reintroduction in Latvia and Russia but the plans fit somewhat oddly with concerns about 'alien species' by some of the same UK bodies associated with the beaver projects (http://news.scotsman.com/politics/War-against-alien-plant-hots.4125762.jp and http://www.guardian.co.uk/environment/2008/may/29/wildlife.endangeredspecies). The main argument seems to be that the beaver is not an alien but a natural resident that was 'unfortunately' removed and 'belongs here'. The whole debate (http://calvin.st-andrews.ac.uk/external_relations/news_article.cfm?reference=295) about what is 'alien' and what 'natural' is very complex (the new claim that there are about 988 alien species in Scotland seems a gross under-estimate when one considers the impact of gardening and agriculture). It can be argued that the beaver has been absent from UK locations for hundreds of years, land use has changed dramatically in that time, human populations have altered and we cannot be certain what wide-ranging effects beaver re-introduction might have on water systems and other species(except that the programme will be costly). I appreciate that the Coypu (Myocastor coypus) was 'South American' but it proved very costly to eradicate this large rodent (not too different from the beaver in its life-style) from the Norfolk Broads where it was suggested it was causing serious damage to the ecosystem. I am not anti-beaver but the present developments seem to be driven by personal enthusiasms that might well quickly change.
My friend, Simon Allen of the Gower Bird Hospital, seems currently relatively unenthusiastic about introducing an effectively new species (such as the beaver) into local, already marginalised wildlife populations. He notes that some people don't appear to appreciate the wildlife that we have (without adding to their excuses?), sending me the above image of the trap that was removed from a location near Neath with a fox cub in it.
- May 29, 2008