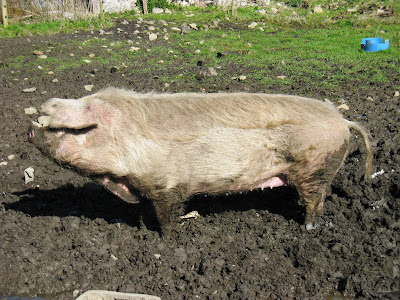 Humans are nothing if not creative when finding reasons to indulge their natural inclinations. The current focus on the global "swine 'flu" outbreak and its alleged origins in the 'manure lagoons' of an intensive pig farming operation in La Gloria Mexico (http://www.timesonline.co.uk/tol/life_and_style/health/article6182789.ece), led the Russian and Chinese authorities to ban the import of Mexican pork (http://www.news.com.au/story/0,27574,25397431-23109,00.html). This 'blaming' of the pig probably has more than a touch of economic opportunism about it as there is virtually no likelihood of this human disease being transmitted in such products. The order by the Egyptian government that, in spite of currently having no cases of swine 'flu, the 250,000 to 400,000 pigs in Egypt should be slaughtered as a 'precaution' is a second case of 'blame the animal' (http://news.bbc.co.uk/1/hi/world/middle_east/8024946.stm). There seems to be a touch of religious opportunism here as the pigs are the property of Coptic Christians and generate a product that Muslims abhor. The single pig in Kabul's zoo (Afghanistan) has apparently been placed in quarantine away from other animals because of fear that it may infect people with 'flu (http://www.digitaljournal.com/article/272257). It is, of course, much more likely that it will get diseases from humans. All such human decisions seem a bit tough on the pigs who, anyhow, didn't ask to be bred as human food.
- May 04, 2009