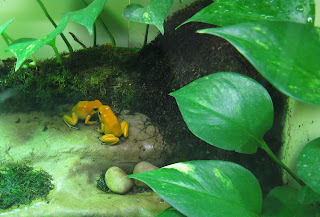 There is news that seven new species of tiny frogs have been discovered in the cloud forests of the Amazon (http://www.theguardian.com/environment/2015/jun/04/seven-new-species-of-miniature-frogs-discovered-in-cloud-forests-of-brazil). These wee beasties apparently go direct from the egg to a frog without passing through a tadpole stage, which means they are independent of standing water. They reportedly absorb needed water from their environment via the skin on their ventral surfaces. The frogs appear to be very distinctive and each raised section of land may have their own particular species. These 'islands' may thus be showing a pattern of speciation comparable to Darwin's recorded island populations of giant tortoises and finches in the Galapagos.
- June 05, 2015