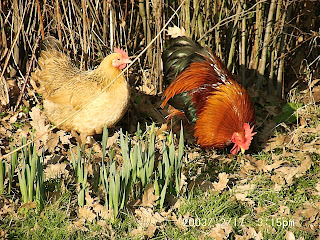 Perhaps they are coming home to roost! The news (http://www.guardian.co.uk/uk/2008/jun/28/animalwelfare.tesco) that 'top-chef' (which makes him a welfare expert?) Hugh Fearnley-Whittingstall used his position as a Tesco shareholder to force a vote for the multi-national company to restrict its sale of poultry to those carrying the RSPCA-supported 'Freedom Foods' label. The result (8.9% of shareholders supported the motion) was interpreted very differently by the two sides, with the chef suggesting that the tide was moving in his favour and the Company maintaining that it was a good result in their attempt to balance welfare and 'affordability' (in these difficult times when, reportedly, more people are shopping at 'bargain' retainers such as Aldi and Lidl). If consumers want to eat chicken at the current frequency, it seems to me that many will have to be produced by 'factory farming' (it seems very unlikely that the number of chicken eaters will decline markedly in the near future). It was even more remarkable that, at the same meeting, 'Care for the Wild' wanted Tesco to end the practice of selling and disemboweling freshwater turtles in its Chinese stores. The chickens appear to have got it easy!
- July 02, 2008