Home on Another Range? 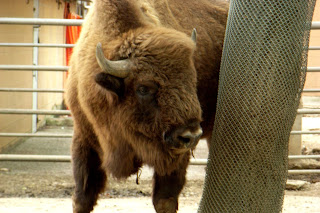 European bison were hunted to extinction on the continent of Europe in 1927. Reintroduction programmes of Bison bonasus have subsequently resulted in more than 7000 animals now living in European reserves and parks (often supplemented with food in the winter). Unusually, a small herd of 22 beasts is reportedly to be thriving in part of the Zuid-Kennemerland national park of North Holland (https://www.theguardian.com/environment/2018/may/28/return-of-the-bison-herd-makes-surprising-comeback-on-dutch-coast). Their actual location is (atypically for the species) an area of dunes and ponds. The people involved in the programme believe that they have demonstrated that European bison are not an exclusively forest species. The herd seem popular with tourists who are asked not to approach them too closely and the animals feed successfully on the scrub vegetation. I suspect that the area will turn out to have a relatively small carrying capacity for this species and there might well eventually be problems with damage to the environment by these powerful animals. Still, nice to see them back. Tot zeins!
- May 28, 2018