Moose on the Loose? 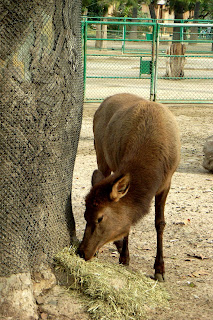 There is a BBC2 programme tonight (http://www.mikebirkhead.com/AlladaleRewildingScotland.htm) devoted to millionaire (he inherited MFI money) Paul Lister's attempts to 'bring back' some wild mammals to the glens of Scotland (he is attempting to create fenced reserve of around 20234 hectares). So far, he has planted some 80,000 traditional trees on his 9310 hectare Alladale Estate (intended as a focus for the reserve) and has released wild boar on to this land. He has also just introduced a male and a female (Swedish) moose in to an enclosure, with a view to letting them eventually roam more freely and breed. European elk were certainly part of this Scottish ecosystem some 2000 years ago. He claims that genetics will not be a problem as the animals are unrelated but it is still a rather restricted gene pool to start from. He perceives Red deer as being problematic (and wants to introduce 2 packs of wolves in to the area to 'thin them down'). Moose will eat more or less the same diet as the deer (they are, however, said to be more prone to browsing) but add in aquatic vegetation from lakes (they do a lot of wading) and will certainly also be targets (eventually) of wolf predation. As a result of this interesting experiment, Mr Lister wants to eventually 'rewild' the glens to a time when there were also wild Lynx and Brown bear. Achieving balances might well be problematic and this landowner has some additional problems including some people dismissing his activities as simply creating a Safari Park, complaints that the fencing will reduce the recently introduced right to roam for hikers etc and concerns by some of his sheep farming neighbours for their stock. He may also have difficulty with the placing of predators and prey into a fenced area (one is banned in the UK from giving live vertebrate prey to zoo animals). Moose are big animals are produce a number of fatal road crashes in Sweden each year. It will be interesting to see how this turns out.
- April 16, 2008