Squirreling Away The Meat Course 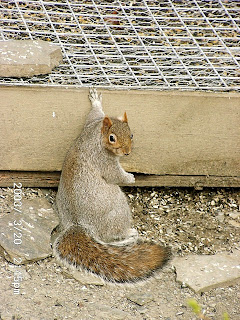 The wide UK cull of the Grey squirrel (http://news.bbc.co.uk/1/hi/sci/tech/4635330.stm) has apparently led (in Northumberland) to some of these animals appearing in butcher's shops or even on the menus of gourmet restaurants. The animal is said to taste like a 'gamey' rabbit. One of the reasons given for the cull is to protect our endemic Red squirrel (the Grey out-competes it and may also pass on Squirrelpox) that is in severe decline in Britain. The Greys may also be damaging to plantations of small conifirs. There seems to be quite a degree of antagonism to the cull in some parts of the UK (there are lots of websites on this e.g. http://www.care2.com/c2c/groups/disc.html?gpp=659&pst=392226). I suspect that the Grey squirrel is the familiar squirrel for most UK citizens. If these animals must be culled, however, I would prefer to see them eaten rather than their carcasses simply disposed of. A former student of mine (Lionel Kelleway) advocated squirrel eating years ago and he got in to awful trouble but simply killing seems a waste!
- April 16, 2008