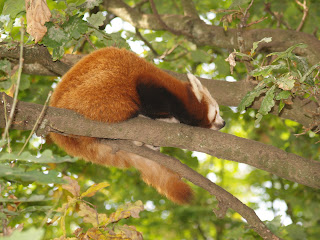 There is an interesting story (http://news.bbc.co.uk/1/hi/scotland/south_of_scotland/7348083.stm) about a female Red panda (Pichu) being discovered, apparently in good health, some 2 months after escaping with her cub (Isla) from Galloway Wildlife Park in Kirkcudbright around the 7th of February. A storm brought down a tree, creating a hole in the fence around the animal's enclosure. People were initially somewhat bemused by the facts that there is not much bamboo around Kirkcudbright and it was pretty cold at this time. It has, however, been pointed out that Red panda may sometimes get by on lichens and other plants, have impressive fat reserves and can go in to a rather effective semi-hibernation mode (coiling their tail around their head). Pichu was discovered in a tree around 2 miles from the Park and this may have given her some protection from dogs, Red foxes etc. She has now been returned to her mate (this is a seriously endangered species) but the Park keepers are still looking for Isla. I hate to raise the possibility but she may have been eaten by her mother (especially if she was still being suckled and succumbed to the elements)
- April 16, 2008