Should Intelligence Get in the Way of Making Money? 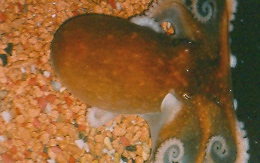 Concerns have been raised about plans to 'farm' octopus species for human consumption, as is currently done for fish (https://www.theguardian.com/environment/2019/may/12/octopus-farming-unethical-and-threat-to-food-chain). The octopus is a mollusc and, lacking a backbone, receives minimal welfare protection (only one species, Octopus vulgaris, is protected along with rats and mice in animal experimentation). The octopus has, however, a relatively large brain and tests have revealed their relative intelligence. It seems likely that these animals would 'suffer' under fish farming conditions (being crowded into a relatively featureless environment and supplied with food but minimal stimulation).
- May 12, 2019