You Were Allright, Jack! 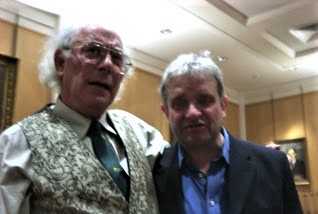 Yet another one bites the dust! I knew Jack Cohen (pictured on the left with his ex-tutee, Nobel Prize winner, Paul Nurse) for around 50 years. He was described in his recent obituary (https://www.theguardian.com/science/2019/jun/03/jack-cohen-obituary) as a 'Reproductive Biologist' but I used to think of him as an Embryologist (I should have guessed that he had graduated from my old University, Hull, where such interests were once popular in the old Zoology Department). Jack was a larger than life character who straddled Science and Science Fiction (he ran SF events in the Midlands and was a friend of Terry Pratchett, of Discworld fame as well as advising many SF writers on convincing characteristics their alien life forms might have). All this and advising on IVF treatment as well! Jack, most notably was a real enthusiast for ideas and had a wicked sense of fun. Real 'old school'!